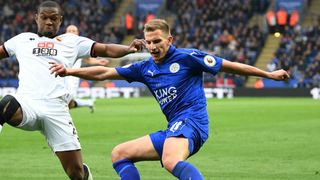 Leicester produced one of the greatest achievements in sport when they went from relegation contenders to Premier League champions last season.

The 2016-17 campaign was a different beast for Leicester, who sensationally sacked iconic manager Claudio Ranieri amid the threat of relegation in February.

However, Leicester sealed survival with Saturday's 3-0 win against Watford and winger Albrighton believes the Foxes achieved their targets, having also reached the Champions League quarter-finals this term.

"The top six or seven sides are probably ones you'd look at and say that's where they should be. We set ourselves standards with how we played and what we achieved last season," said Albrighton.

"Everybody then automatically wants you to go and do the same again, because that's what champions have done in the past.

"People assume when you've won it that you will be in contention again. That's a rod we gave ourselves by achieving what we did and so we have to deal with the criticism we attracted.

"I'd be very surprised if I see another 5000-1 team win it in my lifetime. To expect us to go and win it a second year was a bit naive.

"Everybody in football and in sport knew that our last season was fantastic, but probably a bit of a freak season.

"If we can finish in the top half and with what we've achieved in the Champions League we can sort of say it wasn't a bad season after all."