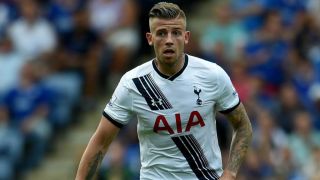 Toby Alderweireld insists Tottenham's winless start to the season is not cause for concern, with the defender confident his team will come good.

Tottenham are still searching for their first win of the campaign, having played out three consecutive draws since losing 1-0 at Manchester United on the opening day of the Premier League season.

Mauricio Pochettino's Tottenham drew 0-0 with Everton before the international break and Alderweireld believes victory is close for the London club.

"In the last home game against Everton I think we played very well," said the Belgium international, who arrived at White Hart Lane from Atletico Madrid during the off-season.

"The only thing was that we couldn't score, but our game is improving.

"I think I've had a good start, and I'm feeling comfortable and confident. I'm very happy at Tottenham."

Tottenham travel to Sunderland on Sunday.