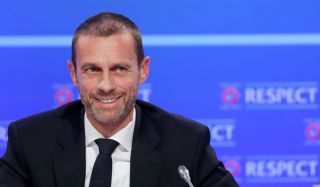 UEFA president Aleksander Ceferin has not given up hope on the prospect of supporters attending the final matches of this season’s Champions League in Lisbon.

The coronavirus pandemic has forced European football’s governing body to stage the last eight of its most prestigious club competition in the Portuguese capital in August.

There remain a number of unanswered questions with UEFA’s plan, not least whether the last-16 ties which were not completed before the shutdown of competition will be played at the original home venue or on neutral territory.

Currently the Portuguese government prohibits spectators from attending matches, but Ceferin did not rule out the possibility of that changing over the next two months.

“We don’t know if only the local fans, if no fans, or even the fans from different clubs could travel to the venue,” he said.

“As it looks now, if we were to decide now, then we would play without fans. We have to wait because the situation is changing every day, we have to see what the situation will be in August.

“The beginning of the final eight is almost two months from now, and remember what the situation was in Europe two months ago. Things are changing but we will have to decide before the draw.”

The draw for the quarter and semi-finals of the Champions League and Europa League will take place at UEFA headquarters in Nyon on July 10.

The final stages of the Europa League will be played across four cities in Germany – Cologne, Duisburg, Dusseldorf and Gelsenkirchen between August 10 and 21, with Cologne hosting the final.

The Champions League final is set for August 23 with the quarter-finals getting under way on August 12.

The World Cup-style format could prove a hit with supporters, at least those content to watch football on television, but Ceferin is adamant the format is a one-off which will not be repeated.

“It couldn’t be a suggestion for the future,” the Slovenian said.

“It will be very interesting I’m sure, but we are forced to do it because the leagues need time to finish in July, so we have to do everything in August. That’s due to this Covid crisis and it’s not an idea for the future.”

The last 16 ties in the Champions League, including Manchester City’s match against Real Madrid, will be played on August 7 and 8. If they cannot be played at the original home venue, stadiums in Porto and Guimaraes will be used.

UEFA’s competitions director Giorgio Marchetti said a decision on where these ties would be played would have to be made before the draw on July 10. Two last-16 matches in the Europa League – Inter Milan v Getafe and Sevilla v Roma – were not even started, so will be played as single-leg ties at venues to be confirmed.

The Women’s Champions League will be concluded in the Basque cities of Bilbao and San Sebastian between August 21 and 30.

The dates were also set for the preliminary rounds of next season’s Champions League and Europa League competitions. These will be played as single-leg ties, with the exception of the Champions League play-off round ties in late September.

The group stages of the competition will start in the week beginning October 19.

It was also confirmed that the rearranged Euro 2020 tournament would be played between June 11 and July 11 next year, with all 12 of the original host cities still involved.

The play-off semi-final and final matches to decide the last four places in that competition, originally due to be played in March, will now take place on October 8 and November 12 respectively.

Those games will be slotted amongst the 2020-21 Nations League group matches.

That tournament will kick off during the September international weekend, with ‘triple header’ breaks in October and November to accommodate the remaining matches.