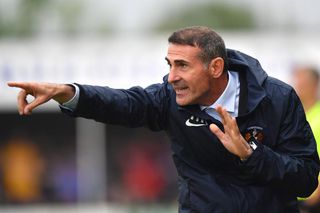 Kilmarnock manager Angelo Alessio heaped praise on his players following their win over St Johnstone and admitted the 1-0 victory had been important for his own reign.

Stephen O’Donnell’s first-half strike earned the Italian his first Premiership success to ease the pressure that was heaped on his shoulders early on by the Rugby Park side’s Europa League exit at the hand of Welsh minnows Connah’s Quay Nomads.

However, following their Betfred Cup victory over Hamilton and a goalless draw with Aberdeen, Alessio was happy to pick up a vital three points at McDiarmid Park.

He said: “In this two-month period, our support wanted this type of match and this result.

“And we deserved this result because today I saw our team compact and strong – and we won from a counter-attack.

“In the last two games, in the victory against Hamilton and against Aberdeen, I have seen all the players working very hard.

“And this result, I think, was deserved and was for the players. They wanted this type of game and this win.”

Alessio refused to be drawn on reports that full-back Greg Taylor is on the verge of joining Celtic and instead concentrated on the positives of his team’s win.

He added: “It is important we speak about our performance. It was important for our mood and for everyone at the club. And for me, of course, but above all for our team.”

However, he admitted the officials got it right in added time when they waved aside an appeal for handball as returning hero Stevie May struck for goal.

He said: “The disallowed goal should never have been disallowed. It’s not offside.

“And to compound it, the officials told us it was Wallace [Duffy] who was offside and he was nowhere near offside. It’s a poor decision.

“It’s the correct decision on the penalty claim we had at the end because his arm is close to him and it’s not above shoulder height.

“I can’t blame the referee for us losing three points, but I thought at times, particularly in the first half, he was in danger of losing control of the game.

“But it’s certainly not his fault. It was the referee’s assistant’s fault that he chalked that off, because it was a perfectly good goal.”