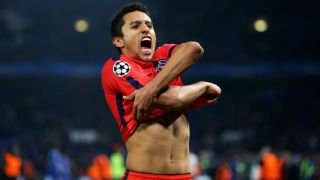 Former Paris Saint-Germain defender Alex believes Marquinhos might have to leave the Ligue 1 champions in order to fulfil his potential.

The 21-year-old joined PSG from Roma in July 2013, but has so far failed to become an undisputed starter due to the stiff competition for places.

Alex feels his compatriot might therefore have to leave in order to take the next step in his development.

"Marquinhos would have a place at any major European club," the current Milan defender told L'Equipe.

"His problem at PSG is that he faces competition from two of the best in the world in his position. And Thiago Silva and David Luiz still have five or six years in them. That's a shame for Marquinhos.

"All the big clubs are keen to sign him. Every transfer window, he receives some amazing offers. He is still young and has to play, show his worth.

"Had I been in his position, I would quit PSG."

Marquinhos has made two starts in six Ligue 1 appearances so far this term.