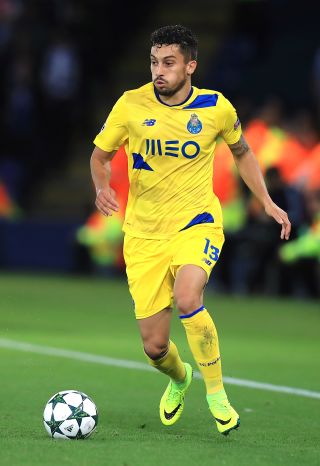 Manchester United have signed Brazil left-back Alex Telles from Porto and teenage winger Amad Diallo will join the Premier League club in January, while a deal to bring in Edinson Cavani on a free transfer is at an advanced stage.

But Chris Smalling has made a permanent switch to Roma, who it is understood completed the 15 million euros (£13.6m) signing when the Italian FA processed the paperwork only a minute before the country’s transfer deadline.

It is understood a fee of £13.5m, plus £1.8m in potential add-ons, was agreed for Telles, who scored 26 goals and contributed more than 50 assists after joining the Portuguese club from Galatasaray four years ago.

Telles, who has signed a four-year deal that includes the option to extend for a further year, becomes the second major signing of the summer window at United following the arrival of Dutch midfielder Donny van de Beek from Ajax.

However, the the 27-year-old, who has been capped once by his country, is not expected to be the only significant arrival at Old Trafford the day after their 6-1 thrashing at the hands of Tottenham, with Cavani set to finalise terms on Monday evening following his release from Paris St Germain over the summer.

Telles, who has won a clutch of honours including league titles with Porto and Galatasaray, said on United’s official website: “To join a club with the prestige of Manchester United is a huge honour.

“You have to work hard to get to this moment in your career and now I am coming to this club, I can promise that I will give everything in my heart to be a success here.

“I won many trophies at FC Porto and I want to continue that at United. The manager has a clear plan and direction for this team and I can’t wait to pull on the famous shirt.”

Manager Ole Gunnar Solskjaer hailed his new recruit as a “fighter” ahead of Telles linking up with the squad, where he is expected to provide competition for Luke Shaw.

Solskjaer said: “First and foremost, I welcome Alex to United. He is a player we have been tracking for some time and his performances over the past few years are exactly what we are looking for.

“He is a fighter and a winner and will add real determination and competition to the squad. Alex has the qualities, both as a player and as a person, that we want here at Manchester United.”

Smalling was signed by Sir Alex Ferguson in 2010 and the centre-back went on to make 323 appearances for United, who claimed two Premier League titles, one FA Cup and a Europa League crown during his time at Old Trafford.

He impressed while spending last season on loan at Roma and has now made a permanent return to the Italian capital, where he has put pen to paper on a three-year contract that runs until 30 June 2023.

“Nothing in life worth having comes easy,” Smalling said on Roma’s website. “My head and my heart has always been in Rome. I am delighted to now be yours.”

United’s recruitment continued on Monday evening with the capture of Diallo, who is set to join United from Atalanta at the start of next year subject to a medical, personal terms and a work permit.

United have also announced the signing of teenage centre-back Willy Kambwala from Sochaux.

The PA news agency understands the fee for the 16-year-old, who has captained France’s Under-17s, could rise to four million euros (£3.6m) with add-ons. He will immediately link up with Neil Ryan’s Under-18s squad.

Romero has been David De Gea’s understudy for the last five seasons but seems to have fallen down the pecking order behind Dean Henderson, who has started in United’s two Carabao Cup matches this season, following his return to the club from two years on loan at Sheffield United.

Everton and Aston Villa have been linked with a move for the Argentina international who started the 2014 World Cup final, but an apparent reluctance to sell drew the ire of Eliana Guercio.

She wrote: “Sergio Romero worked hard for his club. Last trophy they won, they lifted it with him. He helped the team reach 4 finals/semi-finals and then he was left on the bench only to lose them all.

“It is time for them to return the opportunity and let him go. RESPECT FOR ONCE!!!!”