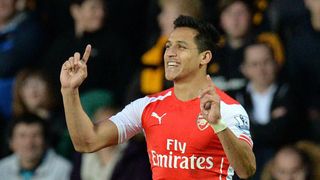 Chile legend Ivan Zamorano says Alexis Sanchez can only get better and feels the forward may be a catalyst for Copa America glory.

It has been a debut season to remember for Sanchez at Premier League side Arsenal, with the forward scoring 24 goals across all competitions.

Sanchez is due to participate in Chile's home Copa America that starts next month, and Zamorano - who scored 37 goals for his country, a record bettered only by Marcelo Salas - believes the former Barcelona star can be the talisman for Jorge Sampaoli's side.

"He [Sanchez] is the leading figure for us. Because of the level that he has displayed at Arsenal, he is the card we can play to do something different," Zamorano told the Copa America official website.

"When he has the ball something always happens and that is a good thing. If he plays well, we have a good chance.

"Let's hope the other 10 [players] are also in top form. He can be as good as he wants, although he can still improve. He will do very well for the team."

Chile are among the favourites to win the Copa America and face group stage matches against Ecuador, Mexico and Bolivia.

And Zamorano believes the likes of goalkeeper Claudio Bravo and midfield duo Gary Medel and Arturo Vidal will be vital to the team's chances.

"[Claudio] Bravo has amply demonstrated that he has the leadership qualities to take the team forward," he added.

"Through his attitude and courage, Gary Medel can lift the side. Arturo Vidal, with what it means to have triumphed in Italian football [with Juventus] which I believe is the most difficult in the world, can affect many from a human and sporting viewpoint - he is very mature.

"We already know what Alexis represents, he is a boy you enjoy watching play, the superhuman effort he puts in."