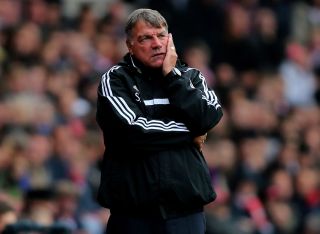 After scoring twice on the opening weekend of the Premier League, Allardyce's side have gone over 270 minutes without a goal in the league.

Injury problems in attack have left the 58-year-old with one recognised striker - Modibo Maiga - available and the Mali international has struggled to make an impact in his four appearances.

West Ham have drawn twice, won once and lost once in the Premier League and Allardyce has told his players they need to improve to break the team's goal drought.

"We're concerned that we haven't scored for a while," he admitted. "It's not that we're not creating chances, but our quality of finishing has to improve. We've ended up drawing two and losing one because of that.

"Only conceding one in four games is a great platform but we have to take our opportunity to score when it comes."

Maiga is again expected to lead the line against Everton on Saturday as West Ham wait for their other striking options to return to full fitness.

"Andy (Carroll) is recovering well," he explained. "We have a programme set out for his recovery and it won't be as long as last time. He will take some time away to have some one-on-one stuff and hopefully that will speed it up.

"(Mladen) Petric is training every day and trying to overcome the fatigue he's feeling.

"He's going through pre-season work, which is more intense physically than general training. His recovery is getting quicker and he's coming along.

"We'll expect him to be able to make an appearance against Cardiff (on Tuesday in the League Cup)."

Allardyce knows Everton will provide a stern test at the weekend, but he remains confident West Ham know how to handle the threat posed by Roberto Martinez's men.

"Everton's players are more or less the same and Roberto has made some very good additions - (Gareth) Barry is an outstanding signing," he added.

"When you look at the squad as a whole it is very strong indeed. We expect them to maybe play out of the back a little more.

"But in general they play the same after that. They try to get into the final third and get good quality balls into the box.

"They had a fantastic result against Chelsea and we expect a very tough game on Saturday."