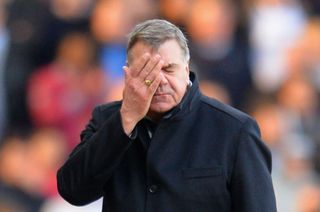 The Upton Park outfit currently lie 12th in the Premier League, seven points clear of the drop zone with three matches to go.

Although seemingly safe, Allardyce is disappointed with the way the season has panned out - after a spate of injuries midway through the campaign - and he expressed his desire to develop the side in the close-season.

"Last season (finishing 10th) was an overachievement and I think this season has been an underachievement up to now," he said.

"There are certain circumstance as to why that's been the case, as we all know. They've all been documented, not just us a business but also publicly.

"It's been a tough one. The players and I are always learning and always know that we have to try to develop the team and move onto the next level.

"To change, but not change too much. You have to get value for money and quality players that are better than you've already got.

"That's just the process of this business if you want to improve and get better."

Allardyce bemoaned the lack of financial equality in the Premier League, claiming that the top clubs have a huge advantage over the rest of the division.

"The great difficulty today is that you're competing with everybody else in the financial market that sometimes is unbalanced," he said.

"If we all had the same amount of money to start the season with, it would make it a much more even playing field but it isn't like that now.

"The growth of the wealth of the bigger clubs and what they can pay, certainly has a cascading effect going down to the players that you want.

"Sometimes the bargaining power between the end of the season and the start of the season is a very difficult game that you have to negotiate in.

"Whether you stand up and be counted in terms of what you want to pay, rather than what the player demands becomes a very difficult job indeed."