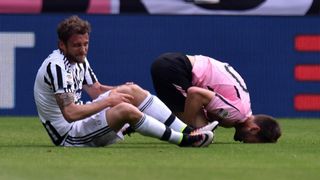 The 30-year-old was taken off on a stretcher during the first half of the game in Turin, having appeared to jar his knee after falling awkwardly.

Allegri revealed after the match that Marchisio is expected to have sustained a serious injury but is eager to wait until tests can be carried out on Monday.

"It's a suspected cruciate injury for Claudio. Tomorrow [Monday] we'll do the tests, but it's something serious."

Juve winger Juan Cuadrado, who scored his side's third in the comfortable win, hopes to see his team-mate return swiftly.

"He's a great champion, we hope it's not too serious and we can have him with us soon," he told Sky Sport Italia.

The news comes as a blow to Italy's Euro 2016 hopes, with Marco Verratti already struggling with a long-term groin problem.