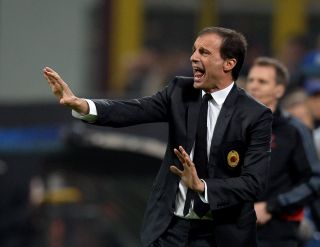 But there was better news for the club's fans following the narrow reverse, after it was finally confirmed that Adil Rami and Keisuke Honda will be joining the club in January.

The visitors went into the break 2-0 down against a hard-working Parma side following strikes from Marco Parolo and Antonio Cassano, with the insipid nature of Milan's display forcing Allegri into a double change shortly after half-time.

Balotelli and Andrea Poli were replaced by Alessandro Matri and Kaka, and the changes reaped immediate reward as first Matri pulled a goal back on the hour, before Matias Silvestre equalised two minutes later from a corner, which had been forced by Kaka.

That quickfire double looked to have secured Milan a draw, but Parolo then lashed a 30-yard free-kick beyond goalkeeper Gabriel in stoppage time as Milan's woes away from home continued.

And Allegri was particularly disappointed with the performance of Balotelli, back in the starting line up after recovering from a thigh injury.

"I took Balotelli off because he didn't have a good game," Allegri said. "We had to change something for the second half. Balotelli had a few good moments, but overall it was not a good game.

"I needed a centre forward who could really play that role and Balotelli wasn't doing it, although he has the characteristics."

Allegri, who hinted before the game that he may not a sign a new contract when his current deal expires at the end of this season, went on to reveal that he would be making two additions to his squad when the transfer window reopens in the new year, with the captures of Rami and Honda from Valencia and CSKA Moscow respectively.

"Adil Rami and Keisuke Honda will be joining us in January and strengthen our squad," he continued.

The coach also criticised the overall performance of his side as they slipped to their fourth defeat in nine Serie A matches.

"We are not balanced yet," he added. "In the first half we created little and conceded twice on the counter-attack.

"After the break we did more and went close to a third goal, but then that free-kick happened at the end.

"We were naive and conceded two goals just before the end of each half.

"We should have closed down and not allowed any more space, but instead we got it wrong.

"We need to improve a great deal away from home, as we've only picked up two points this season on our travels."