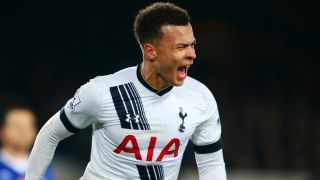 Tottenham star Dele Alli is all but set for greatness, according to former England manager Graeme Souness.

Alli has been a revelation for Tottenham, having come from relative anonymity with MK Dons to Premier League stardom at White Hart Lane.

The 19-year-old scored his fifth league goal in just 18 appearances when he chested down and volleyed a lovely equaliser against Everton at Goodison Park on Sunday.

He debuted - and scored - for England in a 2-0 friendly win against France at Wembley.

And Souness believes only injury or a bloated ego can stop Alli from being one of the world's best.

"He shows such maturity, he takes risks. He'll run with the ball, he'll try and take people on with a dribble and he's got great athleticism," Souness told Sky Sports.

"He's 19 years old and he should only get better and better, he's a baby in terms of football.

"There'll be a lot of people thinking 'how did we miss him?'

"Unless he gets a bad injury or a big head on his shoulders he's destined to be a really, really top player.

"He's a modern footballer, he's a ground coverer with technique."