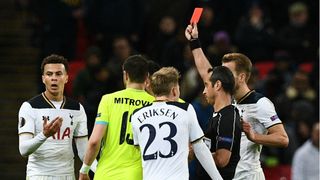 Former Tottenham captain Gary Mabbutt says Dele Alli must learn to curb his temper if he is to realise his potential in Mauricio Pochettino's team.

Since moving to the Premier League from MK Dons, Alli has enjoyed a meteoric rise to prominence and is now a key player for club and country.

However, the England international has not always made headlines for the right reasons.

His 2015-16 season was prematurely ended when he punched West Brom midfielder Claudio Yacob to earn a three-match ban, while another red card against Gent last week stunted Tottenham as they suffered Europa League elimination.

And Mabbut says Alli – who scored in Sunday's 4-0 win over Stoke City – must recognise that provocation will continue to come his way.

It's been a difficult week, I felt horrible after the game on Thursday. Delighted to respond today, thank you for your support ⚽ February 26, 2017

"From Dele Alli's point of view, 20 years of age, he's probably, potentially one of the best young players coming through the ranks," Mabbutt, speaking ahead of the London Football Awards, told Omnisport.

"He's still young, still learning. What he's got to learn is that, because of the ability he has and because of his potential to turn games, he's going to come under a lot of attention from opponents.

"He'd have been the first after the game to apologise to all the players for what happened, you'd much rather he didn't have to apologise – and gains the experience now.

"After what happened last season against West Brom when he also get into an altercation and this again last week, in his head and his mind now he realises he is going to be a marked man, but he's got to take that as a compliment and if somebody fouls him he knows he's gained the better of his opponent."

Real Madrid and Barcelona have been credited with an interest in Alli, but Mabbutt does not believe that Spurs or the player should let that impact on them.

"No that shouldn't affect him, talk about other clubs coming in for you," he said.

"That shouldn't affect the way you go into challenges and tackles.

"What I would say is that, for me, I love it when other clubs are talking about wanting our players or our manager it means we're in the right place.

"I find it all very flattering if any of our players are being talked about for Barcelona or Real Madrid or going wherever and are in demand.

"That proves a point that we're obviously going in the right direction."

Gary Mabbutt MBE was speaking ahead of the London Football Awards, March 2 – londonfootballawards.org. Raising funds for Willow, the only national charity providing Special Days for seriously ill 16 to 40 year olds.