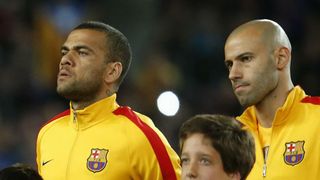 Dani Alves would be "honoured" if Javier Mascherano followed him in swapping Barcelona for Juventus.

Alves was allowed to leave Barca on a free despite having a contract until June 2017, the full-back completing his move to Juve on Monday and signing a two-year deal.

Mascherano has also been linked with a switch to Turin, although Juve director Giuseppe Marotta claimed last week the Liga champions would not sell the Argentina international.

However, Alves still harbours hope such a move can go through.

"He is one of the players I value the most," the Brazilian said when presented to the media by Juve on Tuesday.

"I usually talk with him about football very often and it would be a great honour for me to share this adventure with him.

"But it depends on the clubs and Mascherano, not me.

"It would be an honour because he has the right spirit to be part of Juve."