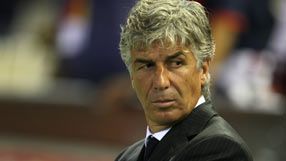 Ballardini was sacked by Claudio Lotito, the owner of current league leaders Lazio, when they were flailing near the bottom last season and has previously managed Cagliari and Maurizio Zamparini's Palermo.

"He's the right person, I like him a lot, maybe because he has already had to put up with difficult presidents like Lotito and Zamparini," flamboyant Genoa owner Enrico Preziosi joked to reporters, confirming Ballardini had signed until June.

"I don't need a phenomenon at the moment, just something simple," added the president, who said dismissing Gasperini was a "painful separation".

Gasperini led Genoa to promotion in 2007 and has since presided over mid-table finishes with his unusual brand of attacking football with only three at the back.

His stock grew so much that he was even mentioned by media as a possible candidate for the Juventus job last season but this term has not gone to plan.

Preziosi brought in a host of signings in the close season, including former Italy striker Luca Toni, in a bid to have a crack at the fourth Champions League qualifying spot.

However, 14th-placed Genoa have struggled to find the net in amassing 11 points from 10 games this season and lost 1-0 at Palermo on Sunday, their fourth defeat in five matches.

Only one sacking after 10 rounds of matches contrasts markedly with last season in Serie A where a record five coaches left their jobs inside eight games.

Bologna's Franco Colomba was dismissed a day before the start of this campaign following a disagreement with new owners.