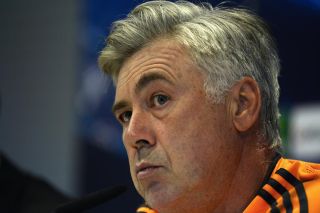 Barcelona are top of La Liga after dropping just two points from their first nine games and head into the clash at Camp Nou as favourites.

But the Catalan giants have not beaten Real in La Liga since December 2011, and the wily Italian is determined to extend that run this weekend as his side go in search of a fifth consecutive win in all competitions.

"I do not know who is the favourite. Everybody thinks that is Barcelona and for us this is not bad," said Ancelotti.

"The timing is good for us. The match is very difficult but last week was good and we improved a lot in all aspects. We can do well in the Camp Nou.

"I have confidence in them. The last time they played the Camp Nou (a 3-1 victory in the Copa del Rey in February) was a great game. We are very excited.

"The key is to have courage and personality to play football, not only to defend. We need character to go to Barcelona and try to play."

"We cannot think of a plan to rein in Neymar because if there is one for him, we must have others for (Lionel) Messi, Alexis (Sanchez) and (Andres) Iniesta," he added.