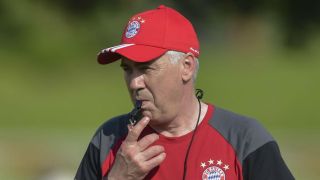 Bayern Munich coach Carlo Ancelotti is unfazed by the rising figure of transfer fees, insisting it is simply a result of clubs receiving increased money from lucrative television deals.

Ancelotti was responding to questions in relation to the present transfer market, which is reportedly set to see Manchester United spend a record-breaking £100million to lure Paul Pogba back to Old Trafford.

Juventus also forked out €90million to sign Gonzalo Higuain, the third most expensive deal in world football following Cristiano Ronaldo and Gareth Bale's moves to Real Madrid in 2009 and 2013 respectively.

But speaking ahead of Bayern's International Champions Cup match against Inter on Saturday, Ancelotti told reporters: "I think that not only football, the market is the market.

"Football is really important, a really interesting industry and the market is like this. I don't see anything special. I think that people love football and we always will love football."

Bayern may not have spent such astronomical fees, but the German champions have been busy in the transfer market.

Portugal's teen sensation Renato Sanches and Germany international Mats Hummels have both made the switch to the Allianz Arena.

The pair's arrival has only enhanced Bayern's strength in the Bundesliga, with all eyes now on the Champions League, such has been the club's domination domestically following four successive league titles.

Training is underway in Charlotte, and the boys are looking sharp!July 29, 2016

But Ancelotti stressed that the Champions League is not the be all and end all.

"I think every team wants to win the Champions League — Bayern, Real Madrid, Barcelona, everybody wants to win it. Only one team wins it," he said.

"I think the collective will be competitive until the very end in all competitions. There's not only one focus.

"We want to win the Champions League, but if we don't we'll be competitive until the end."

On the domestic front, Ancelotti was asked to name Bayern's biggest rivals in 2016-17, and the Italian added: "Borussia Dortmund are maybe the best. They have bought a lot of good players, really young with a lot of talent.

"But I think Bayer Leverkusen and Borussia Monchengladbach also have good squads, so it will be a very interesting championship and we hope to win."