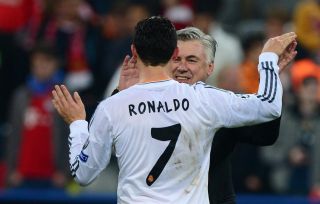 Doubles from Sergio Ramos and Cristiano Ronaldo saw the La Liga giants to a 4-0 second-leg thrashing of Bayern Munich at the Allianz Arena, completing a 5-0 aggregate win.

Ancelotti was predictably delighted after Real executed their counter-attacking style in dream fashion in Germany.

"We played a perfect match, especially in the first half, because we defended well and attacked efficiently," the Italian told a news conference.

"We are happy because we beat a tough team who won the title last year."

Ramos headed in two first-half goals, the first from a Luka Modric corner and the second another set-piece, before Gareth Bale set up Ronaldo on the break.

Ronaldo completed the scoring on 90 minutes with a cheeky free-kick under a jumping Bayern defensive wall.

Ancelotti was full of praise for his attacking trio of Ronaldo, Bale and Karim Benzema.

"Bale, Benzema and Cristiano sacrificed themselves for the team tonight," he said.

In a blow to Real's chances in the final against either Chelsea or Atletico Madrid, midfielder Xabi Alonso will miss the decider through suspension.

"The president (Florentino Perez) is happy and congratulated everyone. We are just sad that Xabi Alonso will miss the final," he said.

"The yellow card was unfair. Xabi very important for us and everyone is sad he will miss the final."

Ancelotti, who was unwilling to label the match the best of his career, believes Bayern will persist with Pep Guardiola's possession-based style despite failing to reach the final.

"Bayern will continue to use Guardiola’s style of play," he said.

"This result will not affect that."