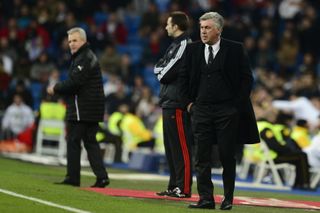 Having overcome Espanyol 2-0 on aggregate in the Copa del Rey quarter-finals on Tuesday, Real face five games in the space of 14 days with a two-legged semi-final mixed between La Liga games against Athletic Bilbao, Villarreal and Getafe.

Real's league commitments would be tough enough on their own with Bilbao in fourth, Villarreal in fifth and a derby against Getafe, while the UEFA Champions League resumes later this month.

But Ancelotti believes it is just a matter of rotating his squad.

"The best way to train is to play football. The problem is that games we have are high intensity so you cannot rest, and for this reason I will make some changes in the team," the 54-year-old coach said.

"I think at this point our physical condition is very good and we shouldn't have any problems during this month.

"In February, we have a week where we can work and get ready for the Champions League.

"Football is always changing and we have to be ready for this, I mean sometimes you have one month, others you have just one week."

Jese Rodriguez scored Real's only goal on Tuesday as they claimed a second successive 1-0 win over Espanyol and the 20-year-old could remain in the starting line-up if Gareth Bale fails to prove his fitness ahead of the capital club's trip to Bilbao.

Bale came off in Real's previous La Liga match, complaining of a niggling injury to his left leg.

"If Bale is in good shape he will play, but if he is not well, Jese will be a strong option because at the moment he is doing very well," Ancelotti said.

Bilbao could join Real in the final four of the Copa del Rey ahead of Sunday's league encounter, if they can overcome Atletico Madrid in the quarter-finals.

Atletico won the first leg 1-0 in Madrid but the Basques have yet to lose at home this season in all competitions, so Ancelotti will be watching Thursday's game in an effort to find a weakness in Ernesto Valverde's Bilbao side.

"It is going to be a very important game and it will be very difficult because everybody knows that Bilbao are playing really good, and we all know that is not easy to play in the San Mames, for example Barcelona lost their game there," Ancelotti said.