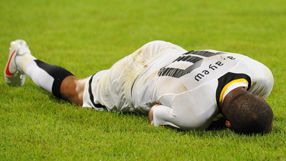 The 23-year-old, who has 44 caps with Ghana, picked up a minor thigh problem during training with his French club Olympique Marseille last week and was due to join up with Ghana by Monday.

The son of former Ghana great Abedi Pele however did not show up, with the Ghanaian Federation (GFA) saying he had informed the body that he would join the squad later this week after having received treatment in France.

"As Andre plans to arrive on Tuesday it means he would be unable to join any of my six training sessions before... Wednesday's deadline for the submission of the final squad," Kwesi was quoted as saying on the GFA website.

"In line with my vision of taking only fit players for the Africa Cup of Nations, I have decided to work only with the players currently in the camp."

Kwesi added that he would continue to count on Ayew, twice nominated for the African Footballer of the Year award, in future years.

The Africa Cup of Nations in South Africa starts on January 19.