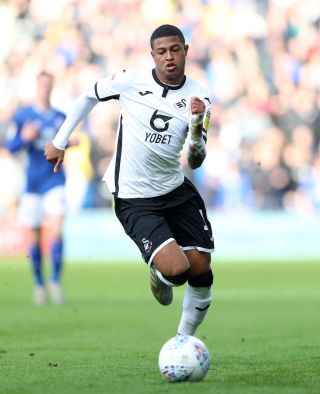 Rhian Brewster scored his first goal in senior football as Swansea returned to the Sky Bet Championship play-off places with a 2-1 victory over Wigan.

The England Under-17 World Cup winner, on loan from Liverpool until the end of the season, equalised with a smart left-footed effort before Andre Ayew completed Swansea’s comeback and took them into fifth spot.

Wigan had led for three first-half minutes through Nathan Byrne and acquitted themselves well in an entertaining contest.

But the Latics have now won only once in 16 games and remain in the relegation zone.

There was a worrying start to the match as Swansea goalkeeper Freddie Woodman and Wigan striker Joe Garner suffered a clash of heads inside the opening 45 seconds.

Both players needed treatment but were able to resume after a lengthy stoppage.

Wigan took the lead after 16 minutes with a sweeping move that stretched from one penalty area to the other.

Right-back Byrne had been involved earlier and he made his way into the box to slot home Kieran Dowell’s cut-back.

But Swansea were level almost immediately as two England Under-21 internationals combined to devastating effect.

Chelsea youngster Conor Gallagher, making his Swansea debut after joining on loan in midweek, slipped a reverse pass into Brewster’s path and his unerring finish found the bottom corner of the Wigan net.

The addition of Gallagher to fellow newcomer Brewster and Ayew provides Swansea with extra movement and bodes well for their promotion prospects in the second half of the season.

Gallagher was eager to break forward from his midfield station and fired over Connor Roberts’ cross as Swansea continued to work themselves into good positions.

But Wigan remained a threat on the break and another excellent move saw Garner head over Antonee Robinson’s cross.

Swansea went close when Bersant Celina sped past Byrne and Kal Naismith had to intervene to make a goal-line clearance.

Celina sent over another cross on the stroke of half-time but the unmarked Ayew headed wide when it seemed easier to score.

Swansea raised the tempo at the start of the second half and Brewster’s shot was blocked before a Kyle Naughton attempt from distance was deflected wide.

Gallagher then found space in a crowded goalmouth to dig out an effort, which was again deflected to safety.

Wigan sent on Wales striker Kieffer Moore for his first taste of action since early December, but Swansea’s superiority was rewarded after 67 minutes.

The outstanding Celina sprinted past Byrne and crossed for Ayew to backheel his 10th league goal of the season.

Ayew and Celina could have extended the lead, but Swansea were grateful to Woodman in stoppage time for denying Moore from a tight angle.