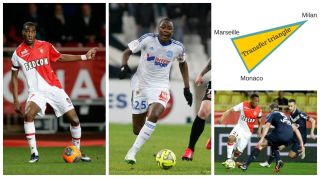 On July 25, 1997 Inter introduced their fans to the original Ronaldo on a balcony in Milan’s Piazza della Repubblica. Almost 18 years later Geoffrey Kondogbia was rather poignantly presented before 400 of them at the same location. The second-biggest signing in the club’s history after the €45m cheque Massimo Moratti cut Lazio for Bobo Vieri in 1999, the transfer has a welcome symbolism to it.

Simultaneously out of Europe for the first time since 1958, the Milan clubs are prepared to spend with the ambition of old in order to return to their rightful place in the continent’s hierarchy. Milan activated Jackson Martinez’s €35m buy-out clause at Porto only for the player to opt for Atletico Madrid, and they also matched Inter’s €40m offer for Kondogbia only for a phone call from Roberto Mancini to persuade him to choose blue and black over red and black. His personal touch incidentally also convinced Xherdan Shaqiri to join Inter rather than Liverpool back in the spring.

How both are financing their respective comeback projects and the risks entailed hasn’t exactly escaped scrutiny. Restructuring at Inter has brought questions from Il Corriere della Sera.

The holding company with a 70% stake in the club is registered in Hong Kong and was initially controlled by trusts in the Virgin Islands. Other holdings that control Inter are based in the Cayman Islands, another tax haven. The lack of transparency is a cause of concern.

At Milan meanwhile, the Berlusconi family business Fininvest is currently underwriting the huge transfer kitty expected to be made available by new investors once the sale of a 48% stake in the club is completed next month for an improbable €480m. The €1bn valuation of Milan has generated plenty of scepticism.

There is suspicion too at the motives of Bee Taechaubol, the frontman of the consortium, and the company he keeps. Nelio Lucas, the CEO of Doyen Sports, the fund with links to Third Party Ownership and the controversies surrounding it just happens to be Taechaubol’s principal advisor and has flanked Milan chief executive Adriano Galliani, unsuccessfully it must be said, on his forays in the transfer market so far this summer. Had the Kondogbia and Martinez deals come off then they would have become the second and fourth biggest in Milan’s history after the €41m Berlusconi paid Fiorentina for Manuel Rui Costa in 2001.

With regard to FFP, Inter recently posted a €103m loss and have been sanctioned by UEFA. They will only be able to name a 21- rather than a 25-man squad when they return to Europe, have to limit losses to €30m in 2016 and break even the following year. Right now they are speculating in order to accumulate: spending today to return to the Champions League as soon as possible, unlock its TV and prize money and attract other better commercial deals through restored status and success.

In the meantime the outlay for Kondogbia, Miranda and Jeison Murillo (€54.5m) will in part be recouped from the expected sales of Mateo Kovacic and Fredy Guarin. Almost all incoming recruitment has been done creatively, either with a loan and then installments over time to spread the cost, or a small amount up front to be followed with the rest later.

As for Milan, lobbying by Galliani and the ECA has brought about a relaxation in the rules of FFP to allow new investors like Taechaubol a short period to accelerate spending and capitalise on their investment providing they can show, via a convincing business plan, how they will subsequently bring the club quickly towards a break-even figure.

The Kondogbia transfer tells us a lot, not only about the Milan clubs, but the one he arrives from, Monaco.

They are considered the winner, along with Inter, of this encouraging renewed sense of competition between the midfielder’s suitors and the auction it created.

Within two years of signing Kondogbia they have made a €20m profit on their initial investment (excluding Doyen’s presumed stake) and this kind of business is now the norm for Monaco.

The club has switched model in the last year. After initially following the example set first by Chelsea, then Manchester City and Paris Saint-Germain, a combination of FFP, its tax status and the changed circumstances and motivation of owner Dmitry Rybolovlev have provoked Monaco to abandon it and follow that of Porto, Sporting, Benfica and Atletico instead.

After the loan of Radamel Falcao and sale of James Rodriguez (for a €45m profit) last summer, the transition has stabilised. Those manoeuvres weren’t necessarily tantamount to a scaling back of ambition but rather the taking of a different approach to winning things.

Unable to make vast amounts of money through matchday revenue and commercial partnerships, another way to do it is by identifying talent, buying it at a relatively low price, developing it and then selling high.

The influence at Monaco is strongly Portuguese. Super agent Jorge Mendes delivered Falcao and even if the move was not a success, it put the club on the map.

Director of sport Luis Campos, a figure with close ties both to Mendes and Jose Mourinho, was behind the appointment of Leonardo Jardim and his staff from Sporting, as well as the signing of the hitherto unknown Bernardo Silva from Benfica for €15.5m, a revelation in Ligue 1 last season and the star of Portugal’s under-21s alongside William Carvalho. One imagines when the time is right – and vice-president Vadim Vasilyev insists it won’t be this summer – Monaco will cash in big time on him and Anthony Martial.

The loser of the Kondogbia affair, together with Milan, could be Marseille. At least temporarily. An agreement was in place to sell midfielder Gianelli Imbula to Inter for €18.5m until Mancini asked owner Erick Thohir why Milan could have Kondogbia and he couldn’t. Incredibly, Inter might now be back in for him. Milan have been mentioned, although their attention has turned to Axel Witsel. Valencia are said to be inclined to bid and there is interest from the Premier League too. Marseille dearly need the Euros after missing out on the Champions League, despite leading Ligue 1 for longer than any other team last season.

Florian Thauvin is likely to follow Imbula out the door. Dimitri Payet looks to be joining West Ham. Free agents Andre-Pierre Gignac, Marseille’s top scorer last term, and Andre Ayew have already departed. President Vincent Labrune’s intentions to follow the Dortmund model and overcome the gap in turnover between them and PSG with smart coaching and shrewd recruitment hasn’t succeeded in the manner it did for the Germans, who beat the richer Bayern Munich to the title in 2011 and 2012. Instead chaos reigns in la vieux porte with the future of coach Marcelo Bielsa still apparently uncertain.

The summer is long. The window isn’t near to being closed. Milan will of course react to Inter edging them to Kondogbia’s signature. Monaco are in the midst of reinvesting some of the money they received for him in Guido Carrillo, the 24-year-old Estudiantes striker who scored seven goals in 10 games in the Copa Libertadores this season. Martin Palermo no less considers him “the best striker currently playing in Argentina” while the front page of Wednesday’s L’Equipe declared: “Marseille are in danger.” The competition, intrigue and interactions between the four has made for one of the stories of the transfer window so far and, hey – they aren’t done yet either.