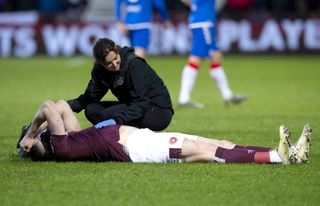 The 23-year-old last week suffered a relapse of the injury which forced him off on a stretcher during the Scottish Cup win over Rangers in February.

Souttar, who also suffered a ruptured Achilles in 2017, now faces another lengthy lay-off.

🗣 "We’ll get him the best care we can get him and hopefully he’ll come back as quickly as he can."— Heart of Midlothian FC (@JamTarts) August 24, 2020

Head coach Robbie Neilson told Hearts TV: “First and foremost we’re devastated for John. His tendon is gone again so he’s going to go in for an operation on Wednesday and then we can just hopefully get him back as soon as we can.

“It’s been a real blow for both John and the club. Obviously having had it already and just coming back from it, it’s been a tough few days for him, but we’re here to help him.

“He’s got a good family around about him as well. We’ll get him the best care we can get him and hopefully he’ll come back as quickly as he can.

“John was going to be one of our key players when he got back fit but that wasn’t to be at this moment in time, so we have to recruit in that area.”