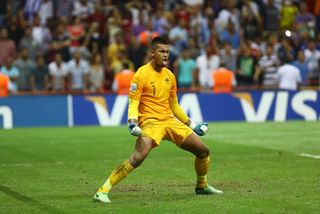 The 21-year-old has struggled to make an impact at the Ligue 1 champions, with Salvatore Sirigu and Nicolas Douchez ahead of him in Laurent Blanc's pecking order.

Areola spent last season on loan at Lens and helped them to a second-placed finish in Ligue 2, with their promotion to the top flight yet to be ratified.

And the 2013 Under-20 World Cup-winner has now completed a season-long switch to Corsica.

"Welcome to Areola loan by PSG," Bastia announced on their website on Saturday.

Makelele, who was PSG assistant until his move to Corsica, took the reins at Bastia in May after signing a two-year contract to replace Frederic Hantz.

He will hope Areola can help Bastia push on from their top-10 finish last season and fight for a European place.

The likes of Mathieu Peybernes, Christopher Maboulou and Floyd Ayite have already arrived at the Stade Armand Cesari in this close-season.