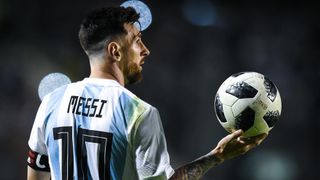 Argentina's World Cup preparations have been left in chaos after their international friendly against Israel was cancelled.

The Israeli embassy in Argentina confirmed the cancellation on Tuesday after Lionel Messi and his team-mates were scheduled to face the Israelis in Jerusalem on Saturday amid security fears.

Argentina's warm-up match at Teddy Kollek Stadium was to be their final game before kicking off their World Cup campaign against Group D opponents Iceland on June 16, following Messi's hat-trick in last week's 4-0 rout of minnows Haiti having been humiliated 6-1 by Spain in March.

While there was no official announcement from the Argentine Football Association (AFA), the Israeli embassy released a statement which read: "The Israeli embassy is sad to announce the suspension of the match between the Israel and Argentina national teams scheduled for Saturday June 9, as a warm-up for the World Cup.

"The threats and provocations directed at Lionel Messi, which logically aroused the solidarity of his colleagues and fear of playing the friendly, are no strangers to the daily life of Israel's civilian population whose sporting stars, to put it simply, have been on numerous occasions the targets of violence and attacks.

"The friendship between Argentina and Israel, which will soon celebrate its 70th anniversary, is not about a football match. The democratic country and plural state [composed of Jews, Muslims and Christians], will always eagerly await the chance to receive one of the stars of Argentine sport."

Argentina striker Gonzalo Higuain told ESPN: "They've finally done the right thing. It's now behind us, obviously our health and common sense comes first. We think the right thing to do was not to go."

On Sunday, PFA chief Jibril Rajoub had urged fans to burn Messi photos and shirts if the Argentina superstar faced Israel in the scheduled friendly.

"The Federation expressed its thanks to all the public and sports institutions and sports in the world who worked tirelessly on the triumph of the message of sport and football in particular and refused to make sport a tool in the hands of politicians and political blackmail," the statement read.

"The Palestinian football federation praised the players of the Argentine team led by star Messi and the rest of the players."