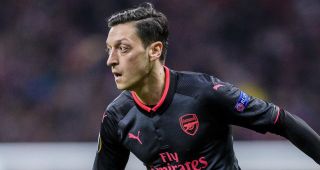 Unai Emery offered his support to Mesut Ozil after the Arsenal playmaker quit the German national team, saying his squad provides "a family for every player".

Ozil - who won 92 caps - criticised the German Football Association (DFB) in a three-part statement announcing his international retirement on Sunday, claiming they had failed to protect him from racially motivated criticism after the team’s disappointing World Cup campaign.

The 29-year-old has joined Arsenal's training camp in Singapore ahead of their pre-season friendlies against Atletico Madrid and Paris Saint-Germain, and Emery said he was glad to have Ozil on board.

"All of us want to help Mesut feel like it is his home here with us, like a family and it is a family for every player," Emery told reporters.

"He feels here with us that he can work every day, and it is good for us that he decided to come here and work with us before our two matches.

Emery admitted he had not spoken to Ozil about the player's decision to end his international career, instead opting to give him time to focus on club duties after a tumultuous few weeks.

Ozil's meeting with Turkish president Recep Tayyip Erdogan prior to the World Cup was condemned in Germany, with Ozil saying the criticism increased after the nation's surprise exit at the group stage in Russia.

When asked whether he had discussed the matter with Ozil, Emery replied: "Not yet, because he arrived on Sunday to travel and I prefer to give him the normality in the team and for him to feel good with us.

"It is a personal decision from Mesut and I respect it.

"He thinks what is best for him, he explained his decision and here we need to help him.

"He has experience, he has quality and he has a great mentality and we are going to help him feel good and to show his quality with us. I am sure he is going to have a big season with us."