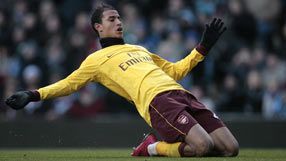 For the second weekend in a row, Arsenal went in 2-0 ahead at the break in the Premier League but this time they held on to all three points at Villa Park despite a strong comeback by their opponents.

Last Saturday, they had allowed North London rivals Tottenham Hotspur to come back from 2-0 down to win 3-2 at the Emirates. They then conceded two late goals in a 2-0 midweek Champions League defeat to Braga in Portugal.

Wenger, whose team took over at the top of the Premier League pending Manchester United's later kick-off at home to Blackburn Rovers, told Sky Sports TV that the recent defeats had played on his mind.

"I think it was a very strong performance against a Villa side which was very dangerous and is a good team," he said.

"Unfortunately at 2-0 at half-time we had a little bit of a syndrome in our head of last week and it happened again that it came quickly back to 2-1," he added.

"But this time we managed to find the resources to keep scoring goals."

Wenger agreed another defeat would have been hard to deal with. "Repeated things happening negatively become a syndrome and that's what you don't want," he said.

Arsenal dominated the first half but Ciaran Clark pulled one back shortly after the break.

Although Marouane Chamakh then restored the advantage, Clark's second goal again had Arsenal under pressure for the last 20 minutes until Jack Wilshere restored a more representative scoreline with Arsenal's fourth goal deep into stoppage-time.