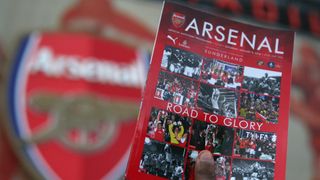 Arsene Wenger believes his side needs to be as hungry for trophies as the likes of Barcelona and Bayern Munich if they are to cash in on a promising start to the season.

Arsenal tops the Premier League after 20 games and remains in contention in the FA Cup and Champions League, where Wenger's men will have to overcome reigning champions Barcelona to progress to the quarter finals.

In the thick of a heavy schedule of games, Wenger has had to use all of his squad to keep the club's winning form rolling while ensuring players remain fit for a big second-half of the season, but said the constant stream of games allows for good rhythm.

"You have a rhythm [when you have a lot of games]," said Wenger.

"You try to check who needs a breather and who needs a rest and you do it. It is easier to keep the squad focused and motivated when you have many games.

"It has both a positive and negative impact. When you are on a roll and have no injuries everyone is in the same direction and it is easier to keep everyone on board. Everyone in the next competition thinks they have to play, and that is a positive.

"There is fatigue and injuries at the end of the season but you can’t say we are not a big club and that we can’t go for the big competitions, that is important.