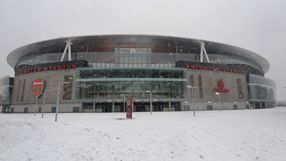 "Despite making every effort to stage tonight's match... the sudden and unpredicted adverse change in weather conditions in the Highbury area has left us no choice but to postpone the fixture," the club said on their website four hours before the scheduled kickoff.

A win against Bolton, who sacked Gary Megson as manager last week and have Burnley's Owen Coyle lined up to replace him, would have sent the Gunners second in the standings above Manchester United and just behind Chelsea.

The tie between Blackburn Rovers and Aston Villa, scheduled for Tuesday, and Wednesday's Manchester derby between City and United were called off because of dangerous travelling conditions across the north of England.

Horse racing was badly hit, with the all-weather track at Lingfield failing to live up to its name when Wednesday's meeting had to be cancelled.

Racing at Kempton Park was abandoned while Fontwell's Friday meeting was called off due to heavy snow with more severe weather forecast.

Four rugby matches were postponed, with the weekend clash between Sale Sharks and leaders Saracens one of those falling foul of the weather.

"All parties have reluctantly agreed that under the circumstances and looking at the weather forecast, postponing the match now is the best option for supporters, players and administrators," PRL rugby director Phil Winstanley told the Sale website.

"Snow and ice around Edgeley Park make it potentially too dangerous for spectators and presents significant concerns for access for the emergency services.

"Under the expected conditions, it is likely that the match would not gain a safety certificate."