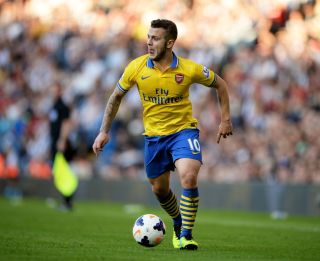 Arsenal lost for the first time in over two months on Tuesday, as goals from Henrikh Mkhitaryan and Robert Lewandowski gave Dortmund a 2-1 win at the Emirates Stadium.

Wilshere told Sky Sports after the match: "(Dortmund) are a good team. They came here and showed that.

"They moved the ball around well, they are difficult to break down, but we had our chances - Santi (Cazorla) hit the bar and we had a few more.

"They hit us on the break and they nicked a goal, but it was a good goal and we'll bounce back."

Dortmund's win means there are now three teams on six points in Group F, with Arsenal and Napoli also having posted two wins.

It should ensure a thrilling finish to a "very tight" group, according to Wilshere, who says Arsenal know they must get a result in the return fixture in Germany.

"Napoli won tonight (2-1 against Marseille), which makes it even more interesting. We're all on six heading into the last three games, so it's all to play for and we know what we have to do now."

Wilshere – who was substituted after suffering an ankle injury – also allayed fears that the problem was serious.

"I'm alright. I just jarred my ankle. I have done it before and it's painful for the first (few) minutes or so, then you can run it off and I'm alright at the minute," he added.