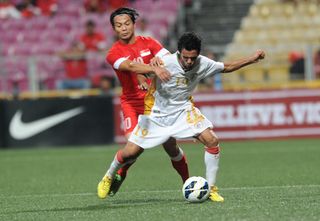 Neither side featured in Qatar 2011 but Oman gave themselves a great opportunity to qualify for Australia 2015 by moving top of the group thanks to strikes from Qasim Said and Eid Mohammed.

Oman, who were without injured goalkeeper Ali Al-Habsi as well as vice-captain Ahmed Mubarak and striker Ahmed Hosni, got off to the better start and were rewarded for their efforts early on.

Good play on the right-hand side from Said saw him cut in and fire an effort into the far corner after 14 minutes to put his side on their way to their second win of qualification.

Singapore, who shipped four goals in their first group game against Jordan, produced a brave response, passing the ball well but lacking the cutting edge to create any clear-cut opportunities.

Their best chance came after 29 minutes, when forward Qiu Li saw his free-kick drift narrowly wide of the post.

However, the killer blow for the hosts came when Eid Al-Farsi made it two just before half-time.

The young midfielder powered a drive past Izwan Mahbud from 20 yards to cap off a comfortable opening 45 minutes for the visitors.

Abdul Aziz Al Muqbali should have scored his second goal of qualification and made it three after 77 minutes but could only force it wide from close range.

In the end, his miss did not matter as Oman wrapped up the points to move above Jordan in Group A.