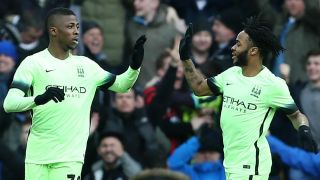 Kelechi Iheanacho scored a hat-trick as Manchester City cruised to a 4-0 victory at Aston Villa in the FA Cup fourth round on Saturday.

The 19-year-old, who also netted against Norwich City in the previous round, scored from close range and netted a penalty inside the opening 24 minutes.

Iheanacho completed his hat-trick late on as he took advantage of some terrible Villa defending to beat Brad Guzan one-on-one, before Raheem Sterling sealed the victory as Manuel Pellegrini's men continued their pursuit of four trophies.

With Sergio Aguero dropping to the bench for City as both sides made four changes, Iheanacho took full advantage of his opportunity up-front with an excellent individual display.

Villa came into the match unbeaten in five games and held City to a goalless draw at Villa Park in November, but they offered little resistance in a dreadful performance.

The visitors were ahead inside four minutes when a corner from Fabian Delph, who was given a frosty reception against his former club, was diverted across goal by Bacary Sagna. It looked like Fernando was poised to score, but his close-range header was blocked, allowing Iheanacho to stab home from two yards out.

Leandro Bacuna and Scott Sinclair were off-target with efforts as the hosts looked for a route back into the game, but City swiftly went two up.

Referee Mike Jones instantly pointed to the spot after ruling Bacuna had fouled Sterling as he attempted to get on the end of Jesus Navas' cross. Sterling wanted to take the resulting penalty himself, but it was Iheanacho who coolly stepped up to send Guzan the wrong way.

Bacuna was furious and raised his hands to the head of Sterling in a clash between the pair moments later, with both players booked.

The feud continued as the Villa player then shoved the ex-Liverpool star off the ball, but he avoided a second yellow as Jones gave him a final warning.

Guzan got out quickly to make an important save from Fernandinho after the midfielder had latched onto Nicolas Otamendi's flick-on, with City threatening to run riot.

Villa survived two second-half scares when Sterling had a shot saved by Guzan before the attacker failed to convert from a good headed opportunity a few moments later.

Willy Caballero was forced into a good save from a Carles Gil free-kick at the other end after a rash Otamendi challenge on Jordan Ayew had given the home side an opportunity from just outside the area.

Iheanacho put the result beyond doubt on 74 minutes when a disastrous backpass allowed him to run clean through on goal and hold his nerve to score.

It was four just two minutes later when another loose pass allowed City in again. Fernandinho had a shot saved by Guzan and Iheanacho could not covert from the rebound inside the six-yard box but his acrobatic effort fell into the path of Sterling, who finished from close range.