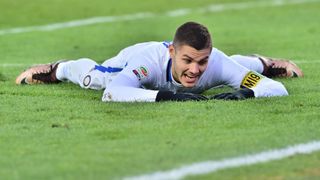 Inter's Scudetto hopes took another knock as they were held to a 1-1 draw by Atalanta at the Atleti Azzurri d'Italia on Saturday.

Roberto Mancini's side headed to Bergamo looking to bounce back from their shock home defeat to Sassuolo last weekend, but found themselves behind early on thanks to an own goal from Jeison Murillo.

Inter hauled themselves level soon after when Rafael Toloi sliced into his own net after a fine combination between Mauro Icardi and Stevan Jovetic, Inter's strike pair who had been widely been criticised this week for failing to play well together.

However, the visitors were indebted to goalkeeper Samir Handanovic for keeping a dominant home side at bay for much of the first hour, with one sprawling stop to deny Luca Cigarini particularly key.

Inter began to turn up the pressure in the closing stages as a frustrated Mancini urged his team forward, but Marco Sportiello was given almost nothing to do in the Atalanta goal as the home side held on for a deserved point.

The Milan club will now find themselves four points adrift of Serie A leaders Napoli should they beat Sassuolo later on Saturday.

Atalanta had lost their previous three league games against Inter but looked determined to end that run from the off, with Jasmin Kurtic heading wide after Handanovic saved well from Boukary Drame.

Inter struggled to get a foothold early on and found themselves a goal down with just 17 minutes played. Drame skipped into the area past weak challenges from Danilo D'Ambrosio and Miranda, and his prod towards goal was turned into his own net by Murillo right in front of Handanovic.

Handanovic had to be alert to deny Gaetano Monachello at the near post as he robbed Murillo inside the Inter area, and that intervention proved timely as an own goal of their own saw Atalanta hand Inter an equaliser.

Icardi was picked out in the area by Jovetic after a clever dummy, and his drilled cross was sliced high into his own net by Toloi from inside the six-yard box.

Atalanta looked the more likely to score the third and Handanovic twice saved superbly to keep the scores level, first keeping out Monachello's half-volley before making a fine reaction stop to tip Toloi's header over the crossbar.

The Slovenia international then produced a spectacular stop to deny Cigarini from point-blank range, as he somehow spread himself mid-air to block a strike from the midfielder that looked certain to put Atalanta back in front.

Inter had offered next to no attacking threat in the second half but Icardi wasted one excellent chance when he blazed a volley over the bar after being picked out by Adem Ljajic's clever chip.

Mancini threw on Jonathan Biabiany and Ivan Perisic in a bid to lift an ailing attack but, despite dominating the play in the closing stages, they failed to muster a clear-cut chance to snatch a vital victory.