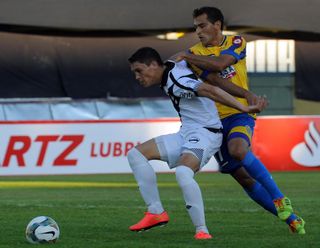 The official confirmation comes as little surprise after the 20-year-old Uruguayan claimed on Tuesday that a deal was in place, with an instant loan move to Atletico's neighbours Getafe reported.

Velazquez has been in the Danubio first team for two years and was part of Uruguay's preliminary World Cup squad. However, he is expected to earn his first cap with the national team against either Japan or South Korea in September.

The youngster was among the best defenders in the Uruguayan Primera Division last season, with Danubio claiming the title for a fourth time.

Velazquez has already passed his medical and joins the La Liga champions for five years.

Atletico said in a statement on their website: "Atletico de Madrid and Danubio FC have reached an agreement for the transfer of Emiliano Velázquez (Montevideo, Uruguay, 1994).

"The Uruguayan underwent the relevant medical examination at Majadahonda’s Fremap clinic before signing the contract that binds him to our Club for the next five seasons."