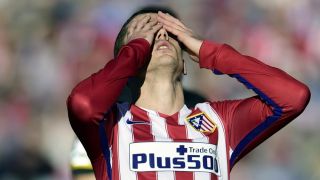 Atletico Madrid missed the chance to return to the top of La Liga after being held to a frustrating 0-0 draw by 10-man Sevilla at the Vicente Calderon on Sunday.

Diego Simeone's men came closest to scoring when Antoine Griezmann headed against the post in a second half that also saw Vitolo sent off for the visitors after receiving a second yellow card.

But seventh-placed Sevilla held on to extend their good run of results to only one defeat in their last nine top-flight matches.

Atletico move level on points with leaders Barcelona, who have a game in hand, after a fifth consecutive clean sheet, but will rue their failure to find a second-half winner.

Both sides had half-chances in the early stages, with Gabi and Saul shooting wide for Atletico, while Adil Rami, Grzegorz Krychowiak and Coke all missed the target with headers for Sevilla.

Griezmann flicked an effort just past the upright for the hosts after a good run and cross from Juanfran down the right.

Atletico pressed again when Diego Godin's flick-on was diverted just over by a stretching Griezmann at the far post.

But it was Sevilla who almost broke the deadlock in the first half when Ever Banega's attempt deflected off Saul and clipped the crossbar after Sergio Escudero had impressively created the opportunity.

After failing to trouble away goalkeeper Sergio Rico in the first half, Simeone brought on Yannick Carrasco at the interval.

Moments after having a claim for a penalty turned down following a trip in the box, Griezmann was denied by the woodwork. A searching pass from Koke found the France forward in his stride and his powerful header bounced off the post.

Vitolo was sent off in the 61st minute for a second bookable offence for bringing down Luciano Vietto right on the edge of the penalty area, with head coach Unai Emery also sent to the stands for his protests.

Atletico's frustration in front of goal continued when Rico denied them from both Saul's looping header and a presentable chance for Carrasco as the visitors – beaten 3-0 at home by Simeone's side in August – claimed a valuable point.