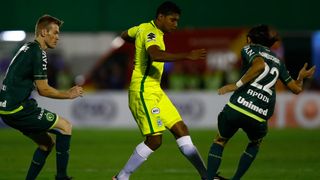 Atletico Nacional romped to a 4-1 victory and the Recopa Sudamericana title as Chapecoense made a sombre return to the scene of last year's tragic plane crash.

Nacional hit the ground running in the Recopa clash – pitting the Copa Libertadores and Copa Sudamericana winners against each other – as Moreno set the tone with his second-minute goal.

Moreno and Ibarguen continued the rout, while Tulio de Melo netted a consolation for the Brazilian visitors at Estadio Atanasio Girardot.

However, there was more to this matchup than the result as it gave Chapecoense the chance to make an emotional return to the city and the crash site where so many lives were lost in November.

In what was supposed to be a routine flight for the opening leg of the Copa Sudamericana final against Nacional, a plane carrying the Chapecoense squad, technical commission and a number of journalists crashed en route to Medellin two days before the match was due to take place, killing 71 people on board.

Only three members of the travelling squad survived - Neto, Alan Ruschel and Jackson Follmann – as Chapecoense were left heartbroken and struggling to field a team.

But Chapecoense have shown strength in adversity, retaining their Santa Catarina state championship crown last week thanks to the help of the footballing community and loanees.