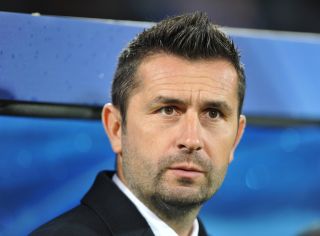 The Austrian league champions were blown away by an early Atletico onslaught before eventually going down 3-0 to the La Liga outfit.

Raul Garcia opened the scoring inside eight minutes before a double to Diego Costa in the 20th and 53rd minutes ensured a comfortable night for the visitors.

Bjelica felt his side were overawed by the stars in the Atletico side and believes it contributed to their forgettable start.

"We didn't snap into challenges the way we had intended in the opening 20 minutes – we showed too much respect," the Vienna boss said.

"We allowed our opponents too much space. Being 2-0 down against a superior side like Atletico 20 minutes into the game is a problem.

"We did not give up, but Atletico were far too big a challenge for us today. It was not our day.

"It was a tough game for us – Atletico are clearly a quality side. The difference between the squads is approximately €200million in player value.

"Atletico are full of international stars from Spain, Argentina, Brazil and Uruguay. They are in good form and proved too strong for us."

The defeat means Vienna are last in Group G and have just one point from their opening three games.

But with Zenit St Petersburg securing a shock away win over Porto on Tuesday, the Austrians are eyeing a berth in the Europa League.

"The Champions League is a big learning curve for us and, with Zenit winning in Porto, we have a chance of claiming at least third," Bjelica said.

"But this is not over yet – we are only halfway through the group stage.

"We have three games remaining and will look to record our first win in the Champions League."