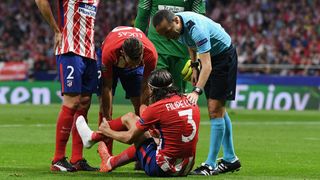 The Brazil international completed the 90 minutes against his former club on Wednesday, but complained of discomfort in his thigh in the closing stages.

Atleti sent the full-back for tests on Thursday, with the initial indications suggesting he has a hamstring injury.

The Spanish side were beaten 2-1 at the Wanda Metropolitano, with Michy Batshuayi scoring the winner in the final minute of stoppage time.

Diego Simeone's men face Leganes in their next LaLiga fixture on Saturday.