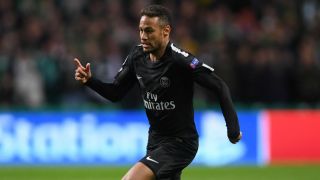 Lyon chairman Jean-Michel Aulas claims French clubs playing in the Champions League are engaged in "geopolitical communication" that serves to undermine the competitive balance in Ligue 1.

Speaking ahead of Lyon's clash with Paris Saint-Germain on Sunday, Aulas said the commercial might of the French sides playing in Europe's top competition - PSG and last season's domestic title-holders Monaco - was making it difficult for others to compete. Nice failed to qualify for the group stage this term after losing a play-off to Napoli.

Aulas previously spoke out about the threat posed to Ligue 1's competitiveness after PSG signed Neymar for €222million, and he indicated that intervention was required to encourage all French clubs to communicate with each other over key issues.

"From the moment when there is more than two French teams in the Champions League, it is impossible to compete because the means are absolutely not the same, and it can be part of a form of deregulation that is important to express.

"The real question is, is there room for competitors who would be liberal, independent, private competitors and clubs who have willingness to invest in a normally organised competition to communicate?

"When the geopolitical communication opposes the regulation of an orderly competition, it is here where reflection is needed."