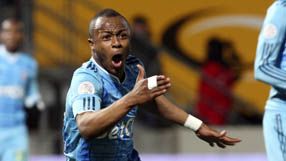 The brothers have played together at French club Olympique Marseille but there was no call-up for Jordan Ayew for the matches in Brazzaville on March 27 and Wembley two days later.

He scored for Marseille in a key Ligue 1 match against Stade Rennes last Friday and had been expected to link up with his 22-year-old brother in an exciting double act.

With Michael Essien not tempted to return from his national team sabbatical to take on some of his Chelsea team-mates Ghana's new coach Goran Stevanovic opted for a tried and tested combination with one new cap and one recall.

Daniel Opare of Standard Liege gets a recall and striker Nathaniel Asamoah from Asante Kotoko is called up for the first time.