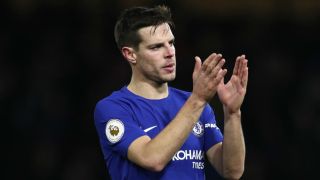 Cesar Azpilicueta believes Chelsea will recover from a poor run of form that has intensified speculation about the future of Antonio Conte.

A 4-1 thumping at Watford on Monday, in which Tiemoue Bakayoko was sent off inside half an hour, followed a 3-0 home defeat at the hands of Bournemouth.

Chelsea were beaten in the EFL Cup semi-final by Arsenal last month and have only won one of their last five Premier League matches, the champions now sitting a point above fifth-placed Tottenham in the battle for Champions League qualification.

Despite the pressure intensifying on Conte, Azpilicueta backed Chelsea to refocus ahead of a Champions League last-16 clash with Barcelona, the first leg of which is at Stamford Bridge on February 20.

"We are Chelsea, a big club - and when we lose one game it's a bad time for us," Azpilicueta told the club's official website after a humbling defeat at Vicarage Road - Chelsea's first loss to Watford in any competition since 1999.

"Obviously to lose two in a row is even worse but I'm sure this team will fight back. We have three targets to go for and we have a massive three or four months ahead of us."

Antonio Conte says he has great disappointment as our performance was very poor. He says we started very badly and played with fear which is something we don't usually do. February 5, 2018

Chelsea briefly looked on track to escape from Watford with a point despite a rotten performance, Eden Hazard hauling the 10 men level with a fine finish.

But late goals from Daryl Janmaat, Gerard Deulofeu - who won the penalty converted by Troy Deeney for Watford's opener - and Roberto Pereyra secured victory for the Hornets.

"I think when Eden scored the ambition in the team, and the feeling we had on the pitch, was that we could get the win, even if we were a man down," said Azpilicueta.

"We started the second half with a good spirit, trying to get the goal, and when we did it I thought the team were capable of getting the three points.

"Of course it's very difficult to take, we've had two heavy defeats and obviously we are really disappointed. It's a massive setback for us.

"Against Bournemouth, in 15 minutes we conceded three goals and in that period when we are bad we need to try to manage and pass through the time in the best way possible."