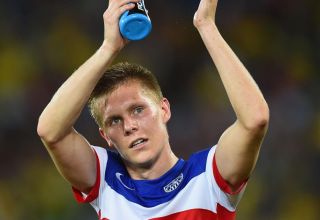 Johansson was part of Jurgen Klinsmann's 23-man squad for the finals in Brazil, the USA impressing many with their performances in reaching the second round, where they were beaten 2-1 by Belgium after extra-time.

The 23-year-old featured in the opening match - a 2-1 win over Ghana - as a first-half substitute for the injured Jozy Altidore.

Johannsson failed to make any further appearances in the tournament, and a statement on AZ's official website on Friday confirmed he was to undergo the procedure.

"Aron Johannsson will this month have surgery on his ankle," it read.

"The striker suffered for a while with the complaint to the joint. Johannsson is expected to be out of action for six to eight weeks."

The news comes as a blow to AZ, who were indebted to Johannsson's 17 league goals for their eighth-place finish in Eredivisie last season.