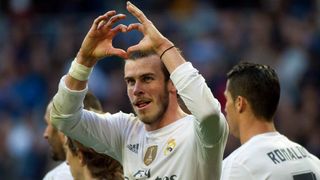 Real Madrid forward Gareth Bale insisted he has the same freedom under new coach Zinedine Zidane that he did with former boss Rafael Benitez.

Much of the lead up to the weekend's La Liga fixture centred on Bale's future in the Spanish capital after Benitez was sacked on Tuesday, with the Wales international reportedly devastated by the decision.

But Bale - again linked with a return to the Premier League via Manchester United - did his best to dismiss suggestions he is unhappy at the Bernabeu as he brought up a half-century of goals for Madrid.

"I don't feel I need to make a statement. I just want to play my football," said Bale, who has scored 10 goals in his last seven games.

"Everyone knows the player who Zidane was and I think there are no doubts he'll be a really good manager too.

"I have the same freedom with Zidane that I did with Benitez.

"I'm happy I scored those goals but the most important thing are the three points and that we won as a team.

"I am very happy. These three points were very important. We are professionals and we must work throughout the season."