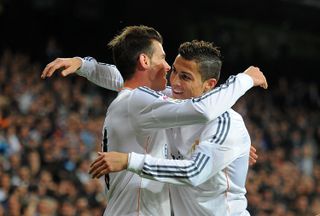 The 24-year-old has struggled for fitness since completing his reported €100 million move from Tottenham in September, but appeared to be back to his best on his first Bernabeu start.

Bale picked out the top corner after 14 minutes to open the scoring and netted his second via a deflected free-kick.

And while the Wales star was understandably thrilled with his performance, he has vowed to produce even better as he regains fitness.

"I felt good and I played the whole match," he told the club's offical website. "I have to keep getting better and work hard to be 100 per cent as soon as possible.

"It's been a great night and was important for my fitness level. We played very well and hopefully we'll have more matches like this in the future.

"Right now I have to keep getting better and work hard and I'll try to be 100 per cent as soon as possible."

The Welshman will hope for another opportunity to continue his comeback when Real Madrid make the trip to Rayo Vallecano on Saturday before facing Juventus in the UEFA Champions League three days later.

"It's a very exciting time," he added.

"We have big matches ahead and everyone's looking forward to them. We're feeling very confident and hopefully we can keep winning and giving performances like tonight's."