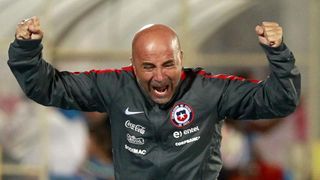 There can be no doubt Jorge Sampaoli is a more than credible candidate to be named 2015 FIFA Coach of the Year ahead of Barcelona's Luis Enrique and Pep Guardiola of Bayern Munich.

The Chile coach saw his three years of hard labour at the helm pay dividends as he secured the nation's maiden senior international title, getting the best out of his players and guiding them to Copa America glory for the first time in the competition's 99-year-history.

True, Sampaoli had a number of factors in his favour: Chile were competing on home soil and could rely on the exceptionally strong spine of Claudio Bravo, Gary Medel, Arturo Vidal and Alexis Sanchez, while Argentina went into the competition after failing to end a 21-year trophy drought with defeat to Germany in the 2014 World Cup final and Brazil, despite 10 consecutive wins following Dunga's return as coach, were still haunted by the spectre of the 7-1 humiliation handed to them by the eventual winners in the semi-finals.

Chile, however, had been slowly evolving since Sampaoli's appointment in 2012 as the Argentinian sought to take the team back to the high-intensity, high-pressing game they became synonymous with under Marcelo Bielsa.

That vibrant style was not particularly evident as they laboured to a 2-0 win over Ecuador in their Group A opener, but the coach responded by switching from a three-man defence to a 4-3-1-2 for the next game.

Despite inconsistent performances at then-club Palmeiras, the attacking midfielder did not disappoint his coach, consistently pulling the strings and acting as an attacking fulcrum for Chile - only Lionel Messi matched his tally of three assists across the tournament.

One beneficiary of Valdivia's creativity was Mauricio Isla, who was assisted by the midfielder in scoring a dramatic winner in the 1-0 quarter-final triumph over defending champions Uruguay.

Isla had struggled to prove himself a top-level player following a transfer to Serie A champions Juventus in 2012, but under Sampaoli he looked a different player from the one who had spent an average 2014-15 on loan at QPR, and the case was the same with Eduardo Vargas.

The 55-year-old knew Vargas from his time at Universidad de Chile, where he was a key figure as the Santiago club completed a treble in 2011 which included the Copa Sudamericana trophy.

The striker set a new record for goals scored in a single edition of that competition with 11 and finished second in the 2011 South American Footballer of the Year award to another bright, emerging prospect by the name of Neymar.

Although Vargas struggled to build on that momentum following a move to Napoli, back under Sampaoli's guidance he was reborn, scoring both goals in the 2-0 semi-final victory over Peru and ending the tournament as the joint-highest scoring player alongside Paolo Guerrero on four.

Conversely, Dunga – who lost captain Neymar due to a tournament-ending suspension in the group stage – was unable to get the best out of the likes Roberto Firmino, Philippe Coutinho and Douglas Costa, with drab, attritional tactics culminating in a disappointing quarter-final exit to Paraguay.

Argentina, too, had struggled to live up to the billing of pre-tournament favourites until a scintillating semi-final display saw them dismantle Paraguay 6-1.

However, Chile stopped them replicating that display in the final, keeping Messi and Co. at bay for 120 minutes to force a penalty shootout following a 0-0 draw.

When Alexis Sanchez dinked the winning spot-kick beyond Sergio Romero, Sampaoli's place in history was assured and scenes of sheer jubilation ensued as a squad including a number of unspectacular players overcame Gerardo Martino's star-studded group.

It is not only Sampaoli's success in 2015, but also his enduring philosophy that has seen him carve out a reputation as one of football's most exciting coaches, while his handling of Vidal, who was involved in a car crash while under the influence of alcohol in the group stage, also proved exemplary.

Although the Argentinian's future with Chile remains unclear with newly-elected Football Federation of Chile (ANFP) president Arturo Salah confirming the coach had attempted to negotiate a reduction in his exit clause during the week, reported interest from Premier League pair Swansea City and Chelsea means it could be just the start of a fruitful career for Sampaoli.