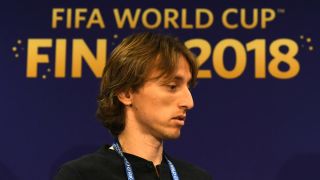 Luka Modric admits he is proud to be considered a leading candidate for the Ballon d'Or but insists he is only interested in winning the World Cup final with Croatia on Sunday.

The 32-year-old's performances in helping Real Madrid to a third Champions League title in a row, coupled with his form at Russia 2018, have seen him tipped to become the first player other than Lionel Messi or Cristiano Ronaldo to win football's top individual prize since Kaka in 2007.

However, Modric says such prizes are not his priority as he attempts to make history with Croatia, who are finalists for the first time.

"I've repeated several times that I'm focused on the team's success," he told a news conference at Luzhniki Stadium.

"When you're mentioned in that context, it's very nice, it's pleasing, but I don't worry myself about that. I want my team to win and hopefully we win [on Sunday]. Other things are outside my control.

"What I want is success for the national team. Individual awards are not a priority for me."

Modric's rise to football's pinnacle had a profoundly difficult beginning, with his family relocated to refugee hotels in Zadar due to the Croatian War of Independence.

The midfielder was then rejected as a youngster by Hajduk Split on the grounds of being too small to make it as a professional, leading to him signing for arch-rivals Dinamo Zagreb.

Now, Modric admits he has always been inspired to prove his doubters wrong.

"I have nothing special to say to them," said the Croatia captain. "I can only say I've never doubted myself. I always believed I can reach where I am today.

"Those words were an extra motivation for me. You don't have to be a strapping guy to play football. These things weren't a burden, they just motivated me further.

"I've seen a great deal of hardship, but the most important thing is never to give up, to trust yourself and soldier on. There are ups and downs on the way, but you have to have belief in yourself, to fight, to struggle to realise your dreams. This was my motivation; it's what led me to this point in my life."