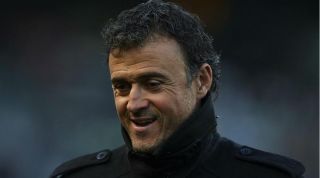 The Catalan club ultimately ran out comfortable winners, with Ivan Rakitic, Lionel Messi and the impressive Luis Suarez getting the goals to take them back to within a point of pacesetters Real Madrid at the summit, with Carlo Ancelotti's men due to face Villarreal on Sunday.

But Luis Enrique focused much of his attention on the state of the turf at Estadio Nuevo los Carmenes.

"First of all, I'm very happy and satisfied with my team's performance with such special circumstances surrounding the game," he was quoted as saying by AS.

"We must congratulate the players for putting three passes together on that turf.

"The two teams attempted to pass the ball to each other and it was remarkable."

Not only did Suarez score his fourth goal in as many games, the Uruguayan also had a hand in Barca's other two goals, as he finally appears to be settling after a slow start in Spain.

Luis Enrique, though, insisted he has been happy with the former Liverpool star's work ever since he joined at the beginning of the season.

He added: "Perhaps he [Suarez] is now more prominent, but since he started with us he has been at a high level.

"For us his work is special and very interesting."