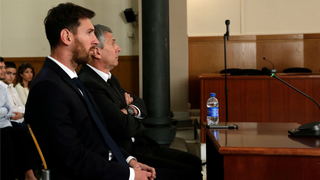 Barcelona have vowed to support Lionel Messi following his decision to appeal against the 21-month jail sentence handed down to him by a Spanish court after being found guilty of fiscal fraud and believe the verdict is "an attack on his person".

The Argentinian and his father Jorge were both given the same prison sentences for the offence, with the 29-year-old fined €2million for three counts of tax fraud and his dad penalised €1.7m.

Neither Messi nor his father is likely to spend any time in prison as any sentence of less than two years - for non-violent offences - can be served under probation according to Spanish law, but they have nonetheless opted to appeal as they deny any wrongdoing and Barcelona stand by their man.

"We understand that Messi is not guilty in any way and has no penal responsibilities," Barcelona spokesman Josep Vives said at a news conference.

"We shall be at his side no matter what it takes. Messi has announced that he'll be appealing and the club will be absolutely and unconditionally at his side when he does that.

"We see this as an attack on his person."