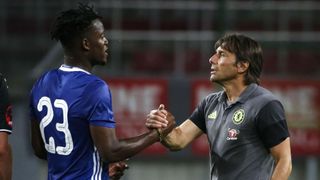 Michy Batshuayi scored his first Chelsea goals as the Premier League side cruised to an 8-0 win in a behind-closed-doors friendly against Atus Ferlach on Thursday.

After making his debut for the club against Wolfsberger on Wednesday, big-money signing Batshuayi hit two goals after coming on as a half-time substitute against the Austrian minnows, scoring with his first touch.

New Chelsea coach Antonio Conte will have been pleased with the sharpness of his forward options with Diego Costa linked with a return to Atletico Madrid, as Loic Remy scored a hat-trick to put his team firmly in control.

Pedro's introduction was among a raft of substitutions made by Conte at the interval and the Spain international struck two goals as he bids to impress after struggling for consistency during his maiden season in English football.

John Obi Mikel was the other man on the scoresheet for Chelsea as they build up their pre-season preparations, with International Champions Cup games against Liverpool, Real Madrid and AC Milan on their upcoming schedule.