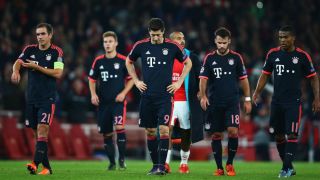 Philipp Lahm has challenged Bayern Munich to show they are a better team than Arsenal on Wednesday after the Premier League side revived their European prospects with victory in the reverse fixture a fortnight ago.

Arsenal breathed life into their hopes of progressing from Champions League Group F by picking up their first points of the campaign against the Bundesliga champions with a 2-0 victory at the Emirates Stadium.

Another triumph in Bavaria will see third-place Arsenal join leaders Bayern on six points - having avoided defeat at the Allianz Arena on their last two visits.

Arsenal won 2-0 at Bayern in the second leg of their last-16 clash in 2012-13 and drew 1-1 at the same stage a season later, although neither result was enough to see them through to the quarter-finals.

Arsene Wenger's side will hope to take advantage of a Bayern side held 0-0 by Eintracht Frankfurt on Friday and who continue to be surrounded by speculation regarding coach Pep Guardiola's future.

Amid reports the Bayern coach is set to agree a new contract extension, Lahm told reporters: "We have to work every day - because you can not worry about what is happening with the coach at the end of the season.

"We are not angry after the first leg defeat. We are playing at home, it is a top game and we want to consolidate first place with a win. Arsenal are a top team with top individuals so we must show that we are the better team.

"It is important how we play. If we bring energy and concentration to the pitch, we will win the game."

Wenger's men have shown improved domestic form of late - winning five Premier League games in a row - but must contend with a lengthy injury list as they seek to inflict a first European home defeat on Bayern since April 2014.

While Guardiola is without the likes of Mario Gotze (groin) and Franck Ribery (ankle), Wenger saw Alex Oxlade-Chamberlain and Theo Walcott ruled out for three games prior to Saturday's 3-0 win against Swansea City.

Wenger - who suggested at the weekend that he would be relatively happy to return to London with a point - must also cope without Aaron Ramsey (hamstring), Mikel Arteta (ankle) and Jack Wilshere (calf).

Per Mertesacker is among a host of Germany's World Cup-winning stars of 2014 set to feature for either side and the centre-back warned that he expects to face a smarting Bayern side on Wednesday.

"They will be angry. We are the first team who has really challenged them and beat them," he said.

"They will be on the ball and try to show that they are back and better than us. They are clever, the Germans."